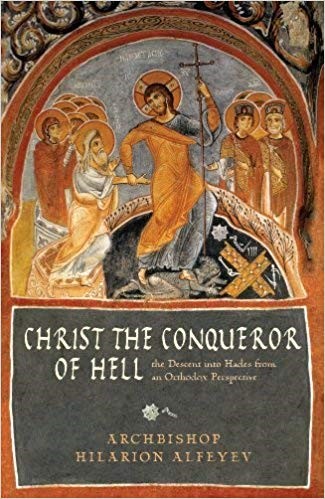 Christ the Conqueror of Hell: The Descent into Hades from an Orthodox Perspective

What could a Russian Orthodox Archbishop’s in-depth look at Eastern liturgies have to do with the urban church? Very much it turns out.

Archbishop Hilarion Alfeyev demonstrates that while emphasizing Christ’s decent to Hades may be out of fashion today, it was vital to the early church. He shows this from the New Testament, other early Christian writings, and the Church Fathers. The early church’s hope rested entirely on Christ’s victory over death and hell. This belief fundamentally shapes the life of the church.

The second half of the book delves deeper into the Eastern Orthodox liturgies and will perhaps not be as interesting as the first half for many non-Orthodox readers. However, the survey from the New Testament through the Fathers is worth the price of the book. The author successfully shows that the confessions, worship, and spirituality of the ancient church simply picture the story of Christ’s life, death, decent, and resurrection as the undoing of death, hell, and the power of the devil.

This fact is relevant for the urban church in every way.  Christ has conquered, he is victorious, he is Lord forever! Let’s follow that example of our forerunners in the faith and tell this story, sing about it, pray as if it were true, and live the victory of Jesus.

Here are a few gems from the book that illustrate what I am mean.

“Christ does not merely descend into the depths of hell—He invades it, vanquishing the devil and demons, smashing the gates, and breaking their locks and bolts. All of these images are intended to illustrate one fundamental idea: Christ descends not as a victim of hell, but as victor over death and Hades.” (p.34)

For the Urban Church: This is the Lord we serve, the one who invaded hell itself, kicked down the doors, and crushed the devil. May we in boldness and confidence invade the dark realms of evil and proclaim Jesus as victor and Lord!

“The theme of Christ’s descent into Hades, found in the writings of the second century, never disappears from Christian poetry but goes from one work to another, from one generation of hymnographers to the next, until it becomes firmly established in the liturgical life of the Orthodox Church.” (p.42)

For the Urban Church: The services, prayers, and songs of the early church sought to tell the story of Christ the victor. Let us raise the banner of our Lord high, and tell his story with everything we say and do, especially when we gather for worship!

“The teaching on Christ’s descent into Hades was an integral part of the Christian liturgical tradition from the early centuries. The descent was referred to both explicitly and implicitly in ancient baptismal rites, in the eucharistic prayers, in the monastic offices of the ninth and twelfth hours, as well as in the Sunday and festal hymns of the ancient church.” (p.155)

For the Urban Church: Christ’s victory over death, hell, and the devil are not a side note! They are at the heart of the work of Jesus, and so they need to be at the heart of our life together.

“This is the never-extinguished hope of all who believe in Christ, who once for all conquered death, destroyed hell, and granted resurrection to the entire human race.” (p.218)

For the Urban Church: Christ’s victory opened a way that no one and nothing can shut! No matter your situation or deeds, if you are of the human race this hope is yours forever in Christ the victor.

I don’t know about you, but I am going to praise this Lord of ours, and I am going to follow him until all his enemies are put under his feet and God is all in all!