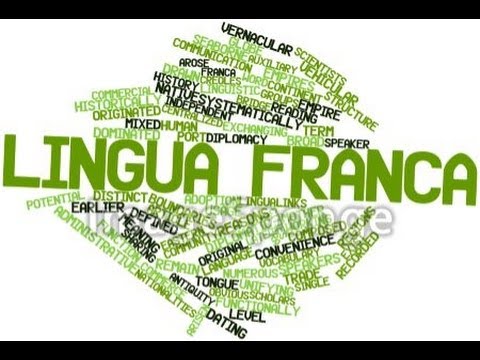 As we live out the Great Commission to the people groups around the globe, we are challenged with contextualizing the vast differences in people based on ethnicity, race, culture and life experiences.  While it may sound simple to say that we should "just share the Gospel", we cannot ignore the complexities caused by our own ethnocentricities making it difficult to present the Gospel in a way that is void of our own cultural biases and life experiences.  In other words, it would be naive to think that our culture is neutral and everyone else's is biased.  We share our lives within our own lens and biases.  Yet, we know we have been tasked with the Great Commission to take the Gospel to the ends of the world.  This is one of the key challenges of missions.  How do we know what is "raw" Gospel truth and what has been influenced by our own culture and experiences?
A lingua franca, sometimes called a bridge language or common language, is a type of language that is systematically used to help people of different languages to communicate.  Lingua francas were developed for various needs including tying together different cultures or religions, sometimes for administrative or diplomatic purposes.  An example of a lingua franca for commercial purposes is that every commercial pilot, no matter what their native language or what country they are from has to be able to communicate in English to other pilots and airport control towers around the world.  In this case, English is used as the linqua franca for the airline industry to ensure that pilots can communicate effectively and understand each other.  Some commonly known languages, such as Swahili, were developed originally as a lingua franca.  Swahili was developed to bridge several Bantu-speaking tribal groups to be able to communicate with one another.  Linqua francas can also be viewed in a figurative sense that is not particular to language.  The numbering system is universal, used across many languages and cultures.  Music notes and the ability to read music is a skill that's common and accepted across many people groups.
What is Christianity's lingua franca?  Is there a common "language" or agreed-upon beliefs that can be communicated across all Christians regardless of their culture, ethnicity, language or tribe?  Thankfully, the answer for us is yes.  This lingua franca already exists, known as the Great Tradition.  It is the basic guide for the Church, and all that we believe.  Dr. Davis' book, Sacred Roots, describes the Great Tradition as "...that deposit of faith, practice, and hope which has served as the backbone of the Church from the beginning...  Objectively, it includes our rediscovery of the Story of God in Scripture which details the saving work of the triune God on our behalf, culminating in Christ's work of atonement for the world.  Subjectively, it includes the Church's corresponding act of faith, worship, discipleship, and witness that has been expressed by the people throughout church history, because of that very work" (pg 14).  To put simply, it's "What has been believed everywhere, always and by all".  No matter our faith tradition, denomination or cultural background, the Great Tradition can be a universal and solid foundation for Christian beliefs for everyone.  This is what we should all agree to believe.
It's not to say that other issues within Christiendom are not important, but while we may agree to disagree with some important issues and topics, we all need to have a common ground in which we can relate, fellowship and bond together as a universal body of Christ.
Recently, TUMI released a new resource authored by Rev. Ryan Carter and Dr. Don Davis named "Guard the Good Deposit", which makes the case that "the whole church has been entrusted with a good deposit of faith and practice," and that "the retrieving the Great Tradition empowers the whole church to guard this good deposit."  This is a short and wonderful resource to help us all understand the Great Tradition.
No matter your faith tradition or culture, we have a lingua franca ingrained in our faith that allows us to be unified as a Body of Christ to go forth together toward the Great Commission.  Let's work together to share Christ to the world!
E-mail me when people leave their comments –
Follow
Posted by Andrew Lee

Andrew Lee is the Executive Director of Operations for TUMI